A few days ago, Romans 13 was quoted as a directive for US citizens to support the government in its recently initiated policy of separating children from their parents. This practice was then referred to as a negotiating tool to win concessions on immigration legislation.

Christians are speaking out across denominational and theological lines to say trying to use scripture to justify something as heinous as taking children from parents without adequate notice of care or information regarding where children are kept or how to be reunited, does not reflect the gospel message of loving neighbor or caring for the downtrodden. Jesus was very clear when dealing with the Pharisees, “render to Caesar, that which is Caesar’s, and unto God, that which is God’s.” Jesus was saying to those who tested him; it is permissible to pay taxes, but do not abandon the values of love, care, and justice because a government, any government, wants you to do so. Immigration policy should be a political issue, when done so inhumanely it becomes an issue to be addressed by the faith community as well as those who have compassion for the poor.

Nearly as important as the policy of separating families, this directive quoting Romans is an attempt to use religion/the church to support the government despite the fact the government is engaging in practices that are clearly in conflict with the teachings of our God, our Savior, and the scriptures. Co-opting the church is a tactic tried by many governments. The Theological statement of Barmen was written by ministers and church folk who resisted the attempt of the German government to co-opt the church in the mid 1930’s. Those authors paid for that statement with their lives!  It is that important. This missive by the JKP leadership is intended to speak out against this inhumane treatment of God’s children and the misuse of scripture.

Following is a statement issued by PCUSA Stated Clerk, J. Herbert Nelson on this issue.

THERE ARE TWO EASY WAYS TO GIVE ON GIVINGTUESDAY!
Click here to read more.

Please support the mission of the Generosity Task Force and John Knox Presbytery by giving now. 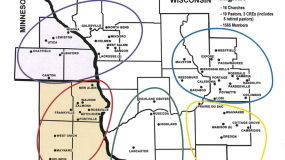